Corky is an amazing dog. He really has no idea that he IS a dog. 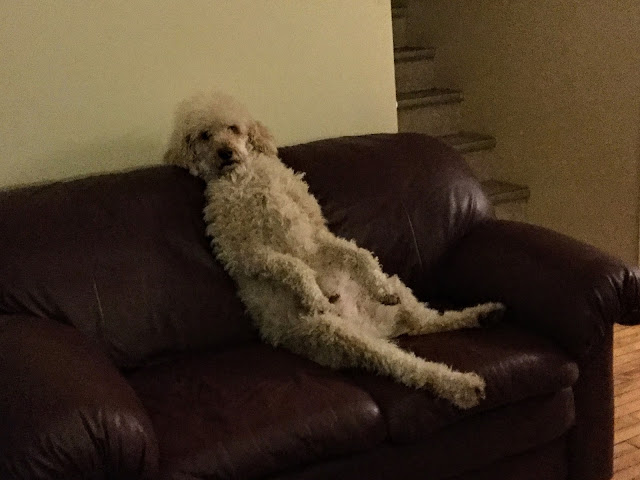 Posted by Susanna Originals at 20:09 No comments: 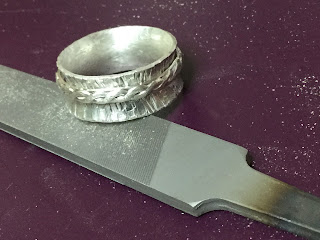 I finally got the nerve to cut a strip of my precious 18 gauge silver sheet and try to make a ring. It was a big deal for me, because a) I rarely wear rings so one made for me would sit in my jewellery box forever, b) I have hands like a stevedore, so a ring made for me would have to be a size 11, using a LOT of silver, and c) making it for someone else would be silly since I didn't know if it would turn out and I really didn't know anyone who would wear it any more than I would.
So, yes, it was a big deal. 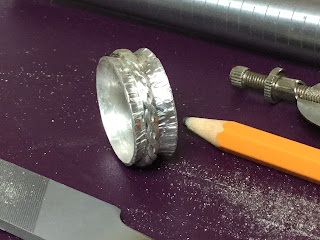 It's a spinner ring. No way was my first attempt going to be a plain band.

Considering the fact that I didn't do a lot of measuring and I really didn't know what I was doing, it turned out okay. I might wear it. 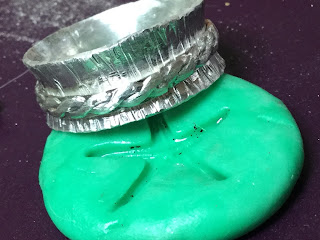 Posted by Susanna Originals at 14:34 No comments:

It has been a while since I posted about my dogs. The following subject is very important to me because Corky, my heart dog, has Addison's Disease.
He was a year old when I got him from the breeder. This breeder is very popular and her pups sell 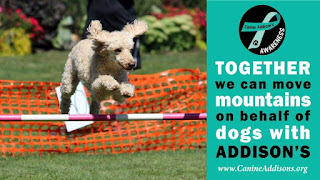 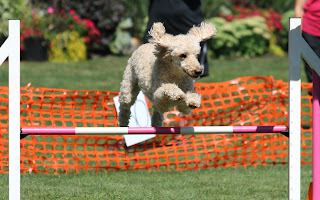 agility. He has typical Addison's and must receive a shot of Percorten once a month and a small dose of prednisone daily.  He happily takes his 1/2 mg prednisone rolled up in a piece of chicken and doesn't even move when I give him his subQ Percorten shot. I keep a record of all blood test results and his injections. My vet has been wonderful, reading all of the information I printed out for her and jumping on board with low dose protocols developed by Dr Julia Bates. We work together to optimize his health care and it's great to understand what is going on. I read both Facebook pages daily and every day I learn more from them about understanding the disease and how to read and interpret blood tests. CARE has produced a wonderful brochure about recognizing Addison's Disease and they will send copies free of charge to anyone wishing to read or display them.


Posted by Susanna Originals at 13:03 No comments:

Another step in the Learning To Walk journey. This one incorporated a few more steps but it didn't turn out quite like my vision.  I got a little excited putting veins in the leaf and now it looks more like a feather. The water droplets on the top of the design look suspiciously like scratches. But I'm getting there....slowly. 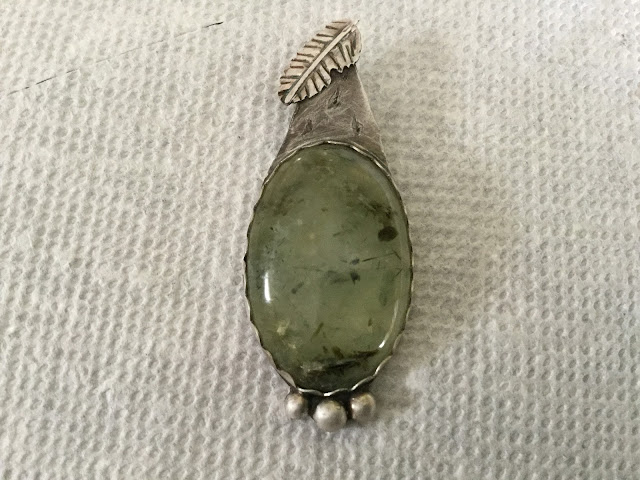 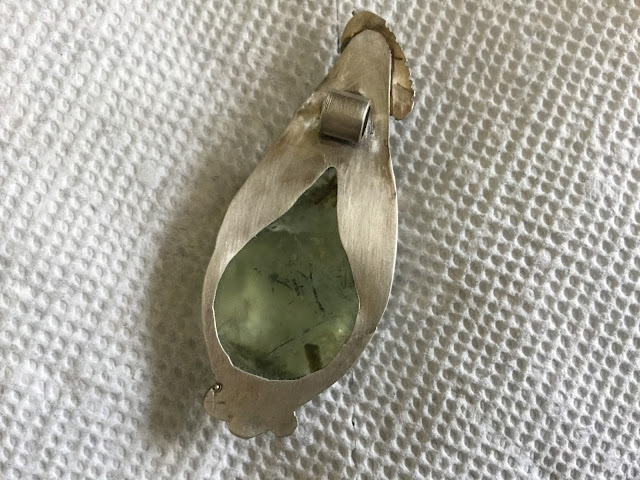 Posted by Susanna Originals at 15:07 No comments:

I have spent the last (couple? I lose track) year having fun experimenting and pushing myself, trying to learn new techniques with jewellery making. Jewelry, for you Yanks. Through this blog, I've shared all of my attempts, strange ideas and disasters.
My latest series of flops involved gallery bezel wire. Delicate and lacy, it looks so pretty when it's wrapped around a stone. It doesn't look so pretty when it's melted into a blob, which is what I've managed to do every time I tried to make a bezel with it.
In an uncharacteristic fit of adult thinking, I realized that I had been trying to run before I even learned to walk. I had never wrapped a stone with a plain bezel, let alone a fancy filigree bezel. So a baby step was needed, but pragmatic me was still battling with adventurous me, so the baby step became a walk
to the park and I used scalloped bezel wire. 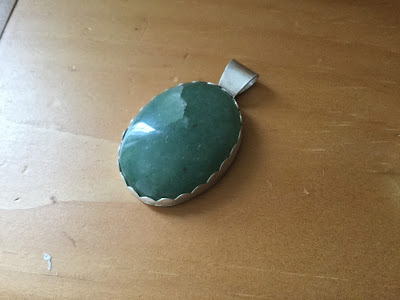 I didn't melt it! The first piece in a long time that I was half-assed proud of. It couldn't be perfect, of course, so the heart cut into the back plate is a little wonky and it cut my stamped anchor in half.  Next time! 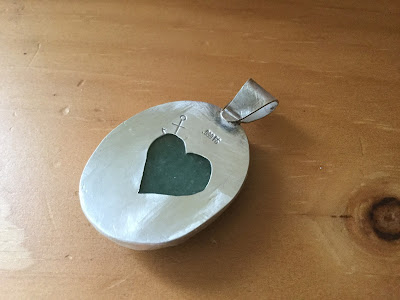 Posted by Susanna Originals at 11:36 No comments:

Oh, the ocean
The huge, lonely ocean
Taking us away from all that we love
Our home, our family, our friends
Ripping us apart
Because our souls are left behind.

What is this world?
Where people kill, maim and destroy
Some in the name of a god
Some just because they can.
It makes them feel powerful
They have no idea
They are just sick and sad and evil.

They don't know beauty and joy.

When will it stop?
It seems that when men are not at war
They make war in their own land
You there! We don't wear those hats here!
God is mine, not yours!
What flaw do we carry?
What is this human imperfection?
Is it not enough
That nature itself
Can kill us?

So the ocean carries me,
Empty, hurting, frightened
My soul in pieces
Alive
As so many have come before us
And so many must still come
To our refuge
Not yet our home.

This place, this country
Can diminish us in our need
As people diminish us with their word
With a shattered heart
Can we regain our pride?
Will we always be less?
I will give thanks
But I cannot yet give my heart
Or my soul
That never crossed the ocean.

I am powerful
I am strong
I will not use that for evil
I use it to survive
To hope that some day I can return
But know that home is forever gone.
Monsters tore apart that world.
I will use my mind
And search for beauty and joy.
Here, across the ocean
I will find beauty and joy.
Posted by Susanna Originals at 11:39 No comments:

Gluten Free Christmas Cake For One

Having to go gluten free hasn't helped my waistline at all, because most gluten free products are full of either sugar or fat to help them taste better. So recently, I stocked up on coconut and almond flour and leaned more towards the Paleo diet. So far, 23 pounds and counting! I'm trying to do it more as a lifestyle change than a diet, so I can stick to it forever, have the occasional treat and not be constantly craving.
And speaking of craving...I was picking up some nuts at the Bulk Barn yesterday and chatted for a few minutes with a lady buying candied fruit for baking Christmas cakes. I never like Christmas cakes much before I couldn't have them, but watching her scoop her fruit, that's all I could think of! So, of course, I bought a small container of mixed candied fruit, having no idea what I could do with them. And with no intention of making a whole cake of any kind, because I have no willpower and would eat the whole thing in two days.
Yay Google! I found a recipe for a vanilla mug cake on wholesomeyum.com. Luckily, I had everything needed, including stevia for sweetener. My mother would have been proud of me, because usually I substitute something, if not several somethings, when I make a recipe. So I mixed it all together, let it rest for a minute until it thickened a little and then mixed in a scoop of candied fruit. It took all of 1 minute in the microwave. Oh, dear Heaven, it was good! Originally 352 calories, I don't know how many I added with candied fruit, but it was worth every decadent bite.
Here's the ingredients but you should visit https://www.wholesomeyum.com/recipes/vanilla-mug-cake-paleo-low-carb-gluten-free/ for complete instructions. And by the way, I used vanilla.

Posted by Susanna Originals at 11:24 No comments: